This site is primarily intended to display a small collection of bronze figurines and statuettes collected over several years in Java. Although the main interest was to collect Buddhist items, it was inevitable that Hindu items would also be found. Hinduism became established in Java about the 4th century CE, followed by Buddhism in the 6th century CE.

The Early History of Java

The history of how Hinduism and Buddhism spread to Sumatra and Java through Indian migration and trading goes back at least 2 millennia. The earliest mention of the islands dates from geographical records made by Ptolemy, who lived from ca. 90 – 168 CE. He was a Graeco-Roman writer living in Alexandria, who referred the island of Iabadios[1]. There were reports of gold, which would indicate it was Sumatra, but there is disagreement about which island the name referred to. From the information that Ptolemy received from illiterate travellers, it may be that it was not understood that two islands were involved. However, Indian records mention both Suvarna Dvipa[2] or Island of Gold and Yava Dvipa[3] or Island of Barley. There is little doubt that these islands were Sumatra and Java respectively. Since the first mention by Ptolemy, Indian shipping developed considerably. There are records of ships, of considerable size, employed from the earliest times by Indian merchants sailing from Kalinga[4] and stories of mass migrations of Hindus to Java as early as 75 BCE[5]. Subsequent migrations from Gujarat and the western ports probably started some three or four centuries later. The earliest inscriptions in Sanskrit found in Java date from the 5th century CE. 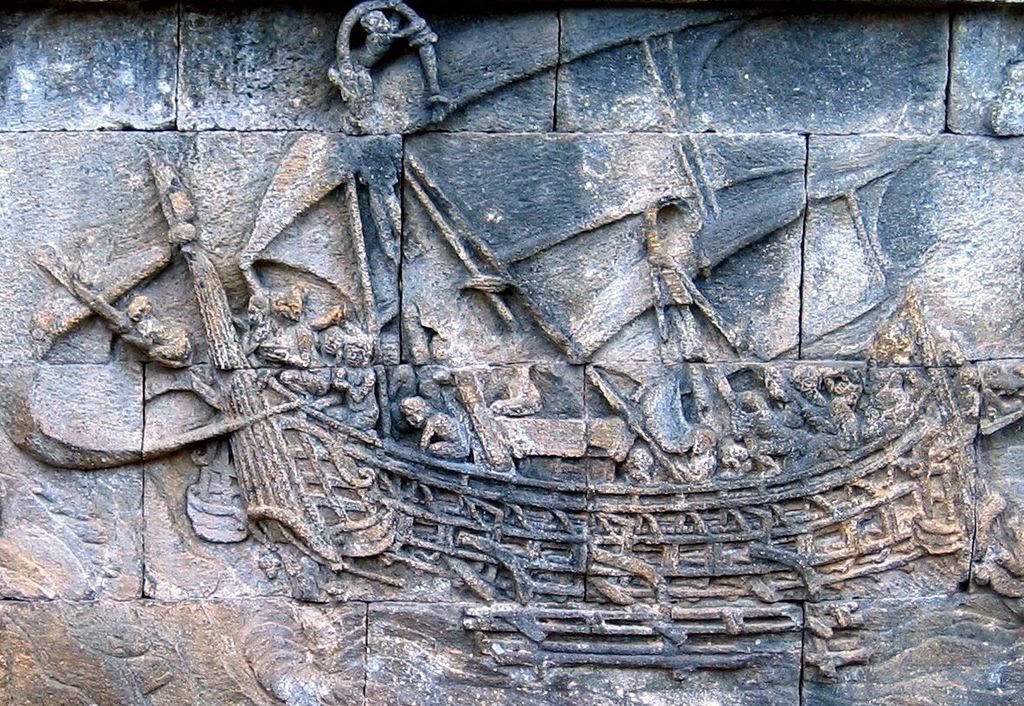 The Hindu and Buddhist Periods in Java

In Central Java, the Shailendra Dynasty (ca. 650-856 CE) was originally Shivaist, but converted to Mahayana Buddhism during the reign 760-775 CE, the Buddhist Candi[6] Kalasan was built and Candi Borobudur was started. In the next two reigns (775-833 CE) the rule extended to Srivijaya, Sumatra and the construction of Candi Borobudur was completed in 825 CE. During the final Shailendra reign in Java (853-856 CE), the king was expelled to Srivijaya and the Buddhist Candi Plaosan and Hindu Candi Rara Jonggrang were built. The latter, being the largest Hindu temple in Java, marked the return of Hindu power in this Javanese kingdom. The Shailendra dynasty continued in Srivijaya until about 1025 CE.

Strong Hindu kingdoms emerged in East Java starting with Kediri (1042-1222), Singhasari (1222-1292) and Majapahit (1293-1527). Majapahit developed into a great empire with its influence extending throughout South-east Asia. During the era of various kingdoms of East Java, Buddhism was accepted as one of kingdom’s official religions alongside Hinduism and at times syncretism was promoted. After Islam began to gain in strength in the region, the power of Majapahit declined and ended in 1527. When the empire crumbled, the royal family moved to Bali, which remains predominantly Hindu to this day.

Hindu and Buddhist Figurines and Artefacts

From the above very brief summary of the history of the complex relationships in Hindu-Buddhist kingdoms in Java, it is not surprising that figurines and artefacts from that era show very mixed influences, which make it difficult for an amateur to ascertain the true significance of the item. The varied versions of Buddhist figurines such as those of the Bodhisattva Avalokitesvara, which are of particular importance in Mahayana Buddhism, are particularly interesting. One purpose of this site is to invite discussions about the descriptions of the items in the collection. Some of the items are presumably replicas of original castings and stone statues. Others may be creations of more recent artisans, who did not understand the significance of the asanas, mudras and attributes. This perhaps explains certain unusual features that are evident on some items, which may be commented on. Apart from statuettes and figurines, a few other related artefacts, some made from brass or other materials, will be included.

Choosing terminology is difficult at times, with Pāḷi language used for Theravada items and Sanskrit language for Mahayana and Hindu items. Where certain items clearly have a Javanese significance, it may be appropriate to use Kawi[7] or Javanese language terms. A Glossary has been written to provide some information about the origins of names and the terminology used for items as they were adopted and adapted in various cultures.

Although a discussion of the iconography of the statuettes and figurines is the prime purpose of this site, bronze and its related copper alloys are interesting simply for their ability to withstand the test of time. Sometimes artefacts survive burial or exposure to the elements for hundreds and in some cases thousands of years. It is interesting, therefore, to explore some of the origins and the history of this remarkable ancient alloy and the metals involved in its production.

In choosing a name for this website, one was sought that would induce a suitable ambience and Apsarah Gallery was chosen.  Apsara is the English spelling, and would have been retained, however because a website domain name could not be registered with this spelling, it was later changed to Apsarah Gallery, where apsarah is the transliteration of the Sanskrit nominative case of apsara. Although the bronze collection does not include any apsaras, some pictures of apsaras shown on ancient temple walls and of bronze statue replicas are presented to illustrate their beauty.

1. Ἰαβαδίου νῆσος Iavadiou Island, Claudius Ptolemaeus (ca. 90 – 168 CE), 7.2.29 .
2. Suvarna Dvipa (Sanskrit: सुवर्ण suvarṇa gold, द्वीप dvīpa island) Island of Gold. Gold is found in Sumatra.
3. Yava Dvipa (Sanskrit: यव yava barley, द्वीप dvīpa island) Island of Barley. Ptolemy was a Graeco-Roman writer living in Alexandria and it is likely that Ptolemy was informed about the rich grain crops raised, which were probably rice. He may have assumed it was barley, with which he would be familiar and for which records of its cultivation go back more than 4 millennia in western Asia.
4. Kalinga was a kingdom on the north-east coast of India, known as early as the 6th century BCE and mentioned in the Mahabharata. As early as the 2nd century BCE, the Emperor Khāravēla established trade routes to Southeast Asia. The kingdom was influenced by Hindu, Jain and Buddhist cultures and was probably responsible for establishing first colonies of Hindus in Southeast Asia. Kalinga was conquered by Ashoka, leader of the Mauryan Empire in a battle so bloody that afterwards King Ashoka embraced Buddhism and ahimsa or non-violence. This region comprised the greater part of the modern state of Orissa, recently renamed Odisha.
5. Palm Leaf Etchings of Orissa, Durga Prasad Patnaik, p.3. Records are hard to find, but other stories mention a Kalinga settlement on the north coast of central Java.
6. The term candi, usually meaning a temple in the Indonesian language, may have originated from the Sanskrit word Caṇḍī, one of the names given to Durga as the goddess of death. The word candhi in Kawi (see Note 7. below) can also mean a burial place, perhaps in the form of a stupa. This would have been appropriate when a king or queen, who had assumed god-like importance, was buried. It is interesting that this word with these meanings is not used in Sanskrit and this term for a temple does not appear to be used outside of Indonesia and Malaysia and regions once under the influence of the Srivijaya or Majapahit empires.
7. Kawi is the name given to Jawa Kuna or the Old Javanese language, which was used during the Hindu-Buddhist era and has a large content of Sanskrit words. It was first written in the Pallava script, which had been introduced from India to western Java as early as the 4th to 5th centuries CE and to central Java in the 8th to 10th centuries CE. In Java the script developed further until the end of the Majapahit kingdom and is known as Hanacaraka. It may still be found in old Javanese documents and inscriptions, but is more prevalent in Bali.